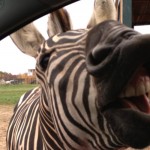 For out-of-towners, I know! I was dubious, too. I saw the billboards for the rare white alligator that reminded me of “See Rock City” billboards on trips to Florida as a child.

I was still dubious the day I pulled into the parking lot … but I was also desperate. I had a bored teenage visitor on my hands. Aaaghh! Once there, I was even more dubious – and yes, I had some big city snobbery going on about what kind of animal park could exist up here. There’s a small walk-thru zoo, like putt-putt small, and then a sliding chain link fence gate and dirt roads beyond that with more fences in view.

How in the world could this work? Well, it does. And it is laugh-out-loud fun, even for teenagers. You get a large plastic cup of pellet food and some instructions and they slide open the gate. There weren’t any cars in front of us on this fall day, so we just followed the car tracks we could see in the dirt. Luckily this camel knew the drill

We pulled close to the first fence and looked at each other trying to figure out how this would work. My niece opened the window and stuck the cup out and this camel leaned its long neck through the fence. Luckily he knew what to do!

After that, we just let the animals lead us, driving up to the next waiting group. We pulled up to the next gate, saw signs for carrots they sell, and received more instructions for this area. One specific, “If the animals pull on the cup, don’t fight them.” Elk in search of food

Here there were elk and Sika deer and bison. The elk was really insistent for his food. While my niece had the food cup, one elk pushed his long face through the car window and was literally rubbing his face against my jacket, nudging me for food like my dogs do. (Yes, my jacket was a little disgusting afterwards.) Here’s looking at you

Then, one elk did steal our food cup with tons of pellets left. We had nothing to feed the bison, zebras and giraffe. That didn’t stop them from visiting. The bison came up close, nudging our entire tiny car for food. One last thing, after laughing yourselves silly, and walking thru the zoo, run home, take a shower and then be sure to wash your car!

I didn’t, and a few days later I had some dogs in Toledo sniffing around my car, walking the perimeter in search of wild animals. See more pics of our adventure here.